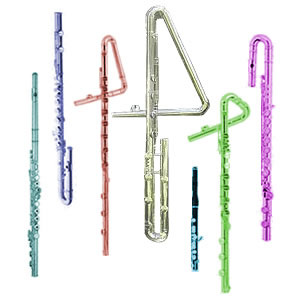 Members of the western flute family

The Piccolo
The piccolo is the smallest member of the flute family. It's about 33cm long, that's roughly half the size of the concert flute. The piccolo has  It has two pieces, the head and the body. Piccolos are usually made of wood, but they're sometimes made in silver or plastic. The piccolo plays an octave higher than the concert flute. Since the piccolo has no foot joint, the lowest note it can play is D. Piccolos are common in orchestras and wind bands.

The bass flute is in the key of C, pitched one octave below the concert flute. The bass flute is so big,that they have to have a curly head joint so that the players can reach the keys. To learn more about the bass flute, click here.

This flute is in the key of G, an octave lower than the alto flute.
To learn more about contra' alto flutes, click here. 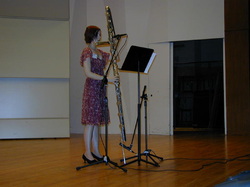 This flute is huge! It has a pitch of two octaves below the alto flute.
To learn more about the subcontrabass flutes, click here.